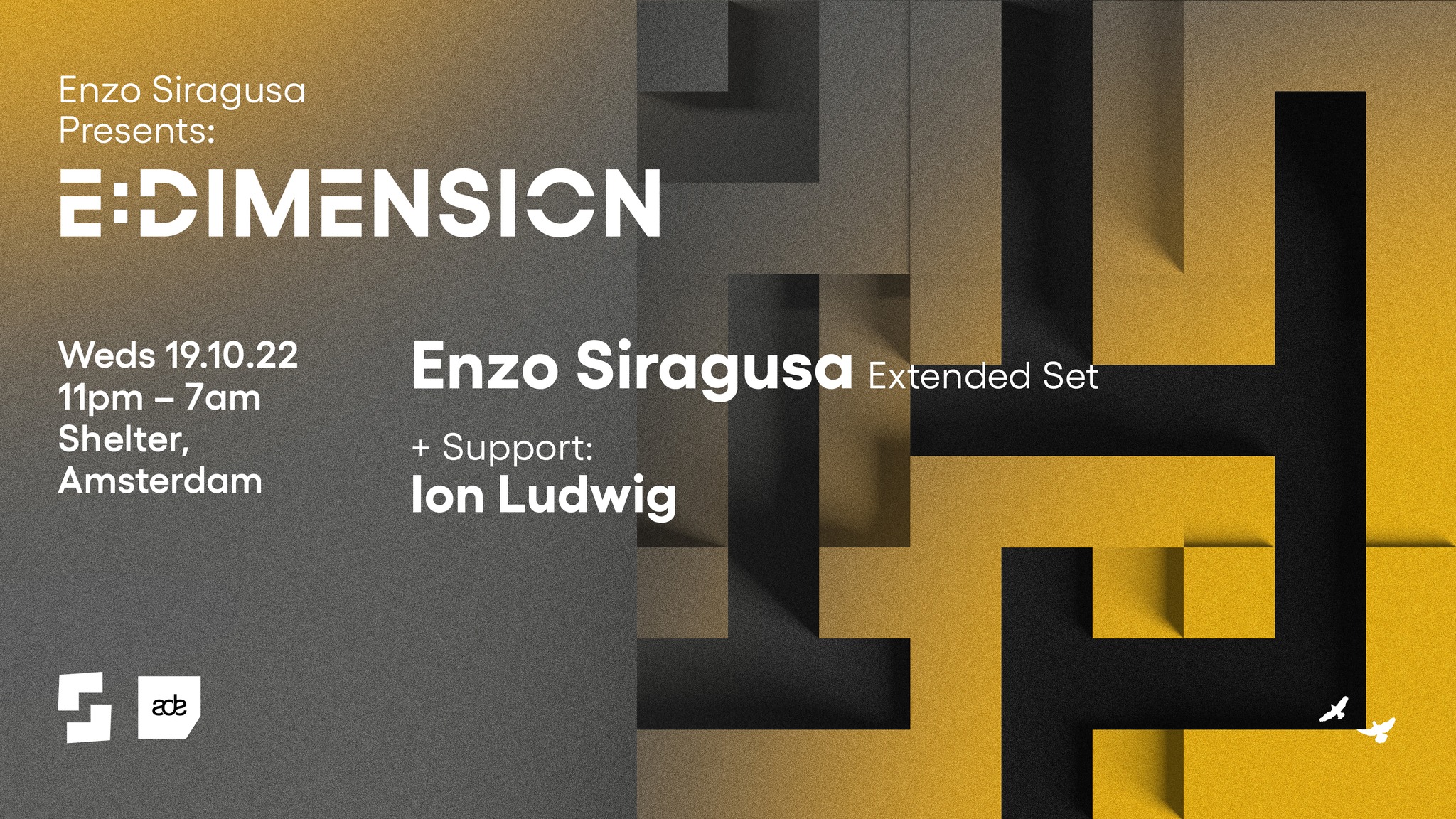 ABOUT THE PARTY
We are honoured to have one of the masterminds behind FUSE kick off Shelter’s ADE program, with Enzo Siragusa’s new concept E:DIMENSION. A venture aimed at reconnecting with the journey of DJing, through longer sets without musical limitation. Enzo’s ‘All Night Long’ and ‘All Day Long’ events have become essential in the London clubbing scene, and now Enzo is bringing that experience to our home. Expect a journey of wide ranged cuts that explore ambient, jungle, DnB, breaks, house, techno, minimal and beyond.

ABOUT THE ARTISTS
Enzo Siragusa
When it comes to rave culture there aren’t many artists out there who are as passionate and dedicated as Enzo Siragusa. The Londoner is the mastermind behind one of the capital’s most infamous party brands, Fuse – an event which he has used to cultivate an unmistakable sound, attracting a loyal, dedicated following in the process. His roots lie in jungle and drum n bass, that pure, undiluted sound which sprung up from London’s inner city in the mid-nineties. Enzo still holds true to many of the aspects of 90’s UK rave culture that made it so special and carries them into his current output. So, whether he’s DJing, making beats in the studio, hosting another sellout Fuse event or letting loose on the dance floor, you can be sure it’s always fueled by a desire to perpetuate the culture that changed his life.

Ion Ludwig
Ion Ludwig moved from Leeuwarden to Amsterdam and from there to Berlin in early 2005. Throughout the 4 years he lived in Berlin, while actively producing in the studio places like Club Der Visionaere and Weekend Club, he shaped his live performances to perfection. He has released his intricate and sophisticated minimal house and techno records, on labels like Alphahouse, Stock 5, Resopal, Thema, Motiv Bank, and his own imprint Quagmire LTD, and has gotten picked up by the masters of underground culture. And now, his name continues to echo the representation of pure quality music, one which also shows that having a background as a musician, certainly contributes greatly to such talent, dedication and wide recognition. Ion Ludwig’s DJ sets are a rare occurrence, don’t miss it this ADE.

TICKET TYPES
Entry before midnight: come in before midnight*
Regular tickets: valid all-night
Doorsale: in case we don’t sell out, there will be doorsale available